INTERVIEW: Turning Unsold Loaves of Bread into Cakes and Cookies 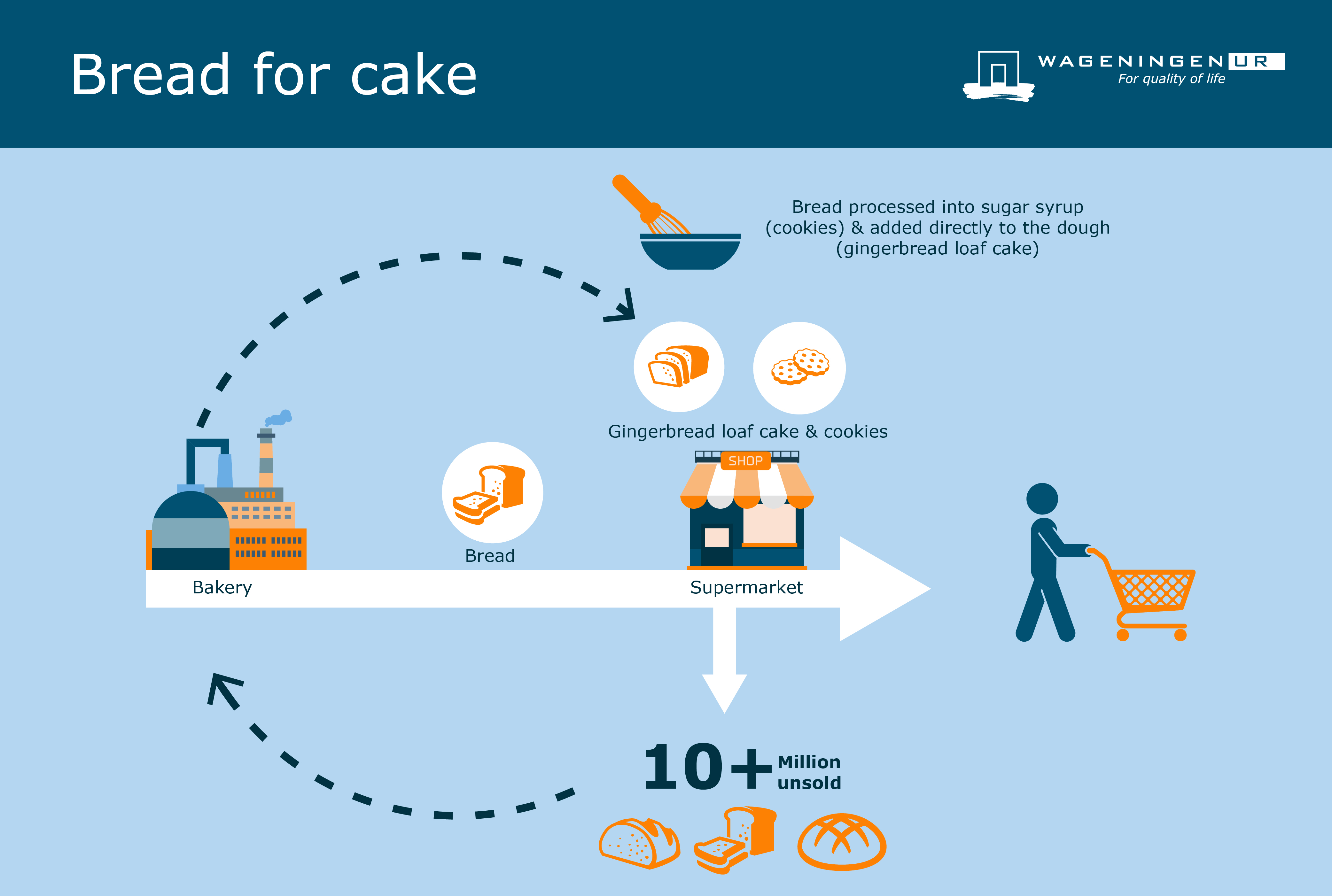 In the Netherlands, tens of millions of loaves of breads are returned to bakeries every year. These unsold loaves are mostly processed into animal feed, but what if there was another use for them – as an ingredient for cakes and cookies? Wageningen University & Research has teamed up with businesses to research high-quality options for using these returned breads as part of a project which includes investigating solutions for national and global food waste issues.

To make cookies, the bread is processed into sugar syrup, while to make the gingerbread loaf cake, it is added directly to the dough.

FoodIngredientsFirst caught up with lead researcher Joost Snels from Wageningen University & Research in the Netherlands, to learn more about the project and its potential impact on the baking sector.

“SBI (Stichting Bakkerij Imago) estimates the volume in 2009 to be about 140 million loaves of overproduction and bread that was returned to supermarkets, while an Investigation by CREM in 2010 showed that consumers throw away 155 million loaves. SBI concluded in 2009 that it was 70 million kilos of bread. Most of the unsold bread from the supermarkets is used for the most part as animal feed. Some also finds its way to other industries, but this is relatively small,” he says.

“It has to start with prevention. The supply chain of fresh bread in the Netherlands over the last two years has focused on service knowing that the Dutch consumer wants to have the choice between several types of bread, even when he/she is entering the shop close to closing time.”

“To be able to meet these customers’ needs, the industry ensures a wide range of bread in which the unsold bread is taken back. Of course industry together with the retailers are looking into supply chain solutions to prevent the amount of unsold bread, but nonetheless there will be unsold bread. This is a very good basis for animal feed, but industry is looking for ways to get to higher valorization, both ethically and economically.”

This project, named CARVE, is a Public Private Partnership project jointly funded by private companies and the Dutch government via the Dutch Top Sector Agri & Food.

Globally, the food waste issue is gaining traction with governments, legislators and there are a wealth of international campaigns aimed at reducing food waste and building sustainable practices.

“This shows that government, companies and knowledge institutes embrace the food waste topics and are willing to cooperate with each other to find solutions. In the Netherlands legislation is not the major driver (there is almost none). The main drives come from within the sector, partly fuelled by the awareness campaigns by government and their own initiatives.”

“In the food industry we see that companies produce food products to be consumed, producing just for the dustbin is not what they want and not what the consumers wants either. This mutual understanding is becoming increasingly embedded in the Dutch food industry, from retailers to consumers. For example, we saw in our research that consumers see it as a positive thing that unsold bread was used to bake the products they consumed. Instead of a dissatisfier, it is really a satisfier.”

“Everybody understands that wasting food is not done, particularly in the light of world hunger. When we look at the supply chain of bread, in the Dutch situation most of the unsold bread is being used, but not for human consumption. With this project we try to see if it is possible to reuse the bread within the same supply chain. The same industry can reuse the bread, the same retailer can sell the gingerbread or biscuits. It is really closing the supply chain.”

What happened during the research? – Turning unsold bread into cakes and cookies

“In this project we looked at two ways to use unsold bread as ingredients. In relation to the crunchy biscuits we researched the processes of enzymatic conversion of starch into sugars (glucose syrup) using special enzymes and the possibilities of replacement of the existing sugars,” Snel explains.

“Related to moist gingerbread cakes, we replaced the flour with the unsold bread. In this research we had to find out to what amount we could go to without changing the ‘look and feel’ of the product.”

“For the moist gingerbread cakes we saw that the cakes were slightly less dry, which was appreciated by the consumers. The taste of the crunchy biscuits was more or the less the same.”

The initial research is now complete and there is potential for upscaling, explains Snel. “At the moment the involved companies are talking with other industrial partners to see if they can get from this research project (proof of principle) to more industrial setting (upscaling) and building the business case to see if replacing the current ingredients with unsold bread is economically viable. It is not only replacing, it is also changing the processes.”

“Furthermore it’s also changing the supply chain by collecting and distributing the unsold bread in a food safe way”.